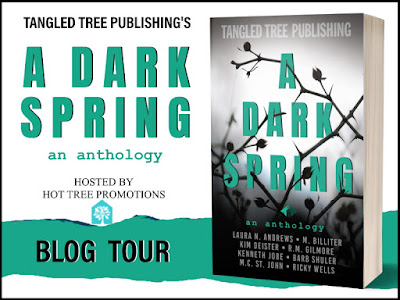 On sale for half price!
Amazon US: https://amzn.to/3bkW0nF
All other links: books2read.com/adarkspring 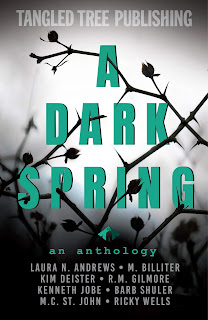 Eight original tales of suspense that will tangle your senses and keep you gripped. From murder to the unknown, the everyday world is explored in these tension-fuelled and twisted novellas. Be prepared to get tangled.

A Tangled Oracle by Laura N. Andrews
In Oracle Vardalos’s dreams, people are murdered. News stories follow and the evidence piles up against her. She must save those she loves; even if it’s from herself.

The Burning Rock by M. Billiter
They agreed it would be easier this way. Still, when it was over, all that remained was an empty saddle and a closed casket.

Tangled Love by Kim Deister
He’s the Gomez to her Morticia, the center of her world. But everything changes when Tessa sees something she was never supposed to see. Love and sanity become tangled, leaving her teetering on the edge of the cliff, wondering if her life will ever be the same again.

Gnarled by R.M. Gilmore
Carter Kennedy returns to her father’s hometown after nearly twenty years to claim her inheritance. She quickly discovers why her father had kept her and her brother away from Scully’s Hollow and the people who inhabit it.

Early Retirement by Kenneth Jobe
Loyal husband and hard-working employee Richard Griffith has his world turned upside down. When he is dealt yet another bad hand and uncovers the identity of his wife’s lover, he reaches his breaking point.

Tangled Obsession by Barb Shuler
Injured and stranded on a mountain with the sun setting and no help in sight, Elsa Malloy has only two options—fight or die. Believing her loved ones are dead, and fighting against the elements of the mountain, Elsa is left to fend off a sadistic killer alone.

We Only Want to Play by M.C. St. John
Teacher aide Julie Trudeau has noticed something odd among the remaining summer school students: they are playing a game of Telephone without moving their lips. When recess turns violent, it’s up to Julie and a ragtag group of staff and students to survive after the last school bell.

The House on Oak Street by Ricky Wells
Spring break approaches and three middle schoolers look forward to their mini-vacation.  But when one of them goes missing, Ann and Roger find that no one will listen to them.  It’s up to them to rescue their friend or are they the next victims of the House on Oak Street? 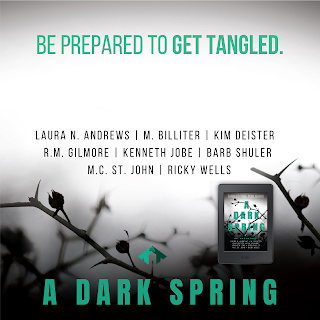 The authors of Tangled Tree Publishing’s first anthology, A Dark Spring, share the inspiration behind their twisted and tangled stories.

The internet. I was being a nerd and looking up mountains and places for another story I am working on when an image of Mt. Timp came up. A little research of the valley left me going hmm… which in turn led to the chaos that is Tangled Obsessions.

I was working in a cubicle-filled office much like the one in the story. A co-worker was retiring after decades of loyal service, and I wondered if she felt her time served was worth it.

I watch a series on ID Discovery about families who only later discover that one of their own is murderer, rapist, etc. The daughter, granddaughter, and great-granddaughter of criminal attornies, I’ve always been fascinated with both criminal psychology and the seemingly implausible idea that loved ones would be so blind to it. That’s what I wanted to explore in this story.

Without giving too much away, a certain intrigue of mine caused me to come up with a twist. This twist was actually the start of A Tangled Oracle, and the story stemmed from it. The main character, Oracle, being Greek, was inspired by my yia yia. Although we have no Greek background in our family, we’ve always referred to her as, “yia yia” rather than, “grandma,” or, “nan

I was on assignment for a Jackson Hole, Wyoming-based newspaper when I went out for three days on horseback with a cowboy. I learned to herd cattle, which plants were safe to eat (chokeberries always good and plentiful), and at night I found warmth around a campfire. It’s also when I asked this cowboy, “Why don’t rocks burn?” I honestly didn’t know, and it was the first time he laughed. So, when this story poured out of me, I knew the title would play off that moment on the mountain. “The Burning Rock,” named itself.

We Only Want to Play came to me first as a short story. I was thinking about my own elementary school and how much I enjoyed making up games with my friends during recess. Most of them were silly. Others were intense. But whenever the recess monitor came by to ask what we were playing, every one of us instinctually switched out of the group game. This was an adult, and adults were here to poke holes in our fantasies. As kids, we know this without being told, and without telling each other. Protecting our play world is a territorial instinct. That almost telepathic groupthink fascinated me. What would happen, I wondered, if that instinct turned malignant? I saw kids turning ugly during recess and a young teacher discovering what they were plotting. I knew then that my short story was going to get much longer. I buckled up for the ride and got writing.

The first thing that came to mind when I saw the theme Tangled was hair. The image of matted, tangled hair dotted with debris, twigs, leaves, popped into my head. One-hundred percent pantsed, Gnarled started with the body and went from there.

I’ve always like haunted house stories, but they often have a tendency toward formulaic plots.  I decided to write a story that had all the set up and anticipation of a haunted house before pulling the rug out from under the reader, pivoting to a monster type of a story.  I also liked the idea of playing with who the monster was in the story as often humanity provides all the necessary behavior to be the monster.

Velocities by Kathe Koja is a group of intense, bold, deep and dark short stories. There are thirteen stories and each story is a masterpiece in itself. The stories cover a wide variety of topics from love, death, pain, hope and a lot of others.

At Eventide, Toujours and The Marble Lily are my favorite stories. I really do not want to discuss the stories here but in some stories the author brings the darker side of the regular emotions for the reader to feel. They are dark and intense yet sensible and heart-breaking. The elements of the stories are rich and cunning in a special way.

Author Kathe Koja’s writing style is not regular but diverse and unique and she successfully presents her incredible vision to the readers in the most amazing way. This is the first time I am reading something like this. It definitely triggered a lot of emotions inside me.

I received the advance reviewer’s copy of this book from Meerkat Press for an honest review.

This book is releasing on 21st of April, 2020. I recommend this book to everyone who wants to try something different. You can buy this book here.

I read ‘A Gathering of Friends’ by Ruskin Bond just now. Its a book with short stories personally picked by Mr. Bond from his previous writings. This would call this book a bouquet of short stories with each story resembling a unique flower in a bouquet. This is very easy to read. Lovely, in fact. I would recommend it to every age group, including kids. The stories majorly are set up in different Himalayan villages. Being an Indian, I’ve not heard of those villages myself. Each story is unique in itself. I heard Mr. Bond in one interview, saying that, a critic called his short stories plotless and Mr. Bond also agrees with him mentioning that his stories are majorly about the character. After reading this book, I can’t agree more with Mr. Bond. His characters are very well defined and established and the story simply goes along with the character. I didn’t see the need for the plot, as such. The book is very refreshing, given it is a collection of stories from the times of early days of independent India. The stories seemed ageless.

I loved all the stories and ‘The Blue Umbrella’ is my favorite in particular. The details were ravishing and I felt myself walking the through the streets of Mussorie and many other remote Himalayan villages. I totally enjoyed reading this book. There are many stories which I can relate myself to. Some are about friends, some are about kindness, while others are about first crushes and first kisses.