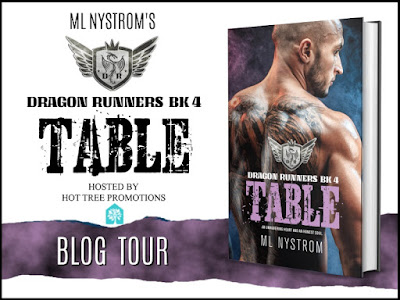 An unwavering heart and an honest soul. 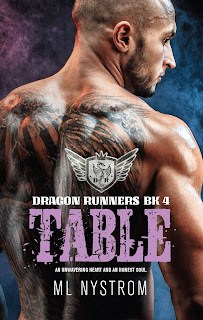 Intimidating and living by a strong code of ethics, Table’s integrity is unwavering, as is his ironclad will when it comes to safeguarding those he cares about. He’s the man to guard your back, shelter you in time of need, and be the shield.
Just don’t ever lie to him.
Table’s life is turned upside down when he unexpectedly discovers he’s a dad. Trying to navigate his life as a single father to a baby girl, he takes a break from his Dragon Runners MC brothers, moving to the family farm.
When Table meets nomadic Lori, who trades work on the farm for rent, he’s as intrigued as he is wary. She’s a woman who wears her attitude like armor. And despite her fierce independence, Table can see the fear dancing in the shadows of her eyes. It’s enough to make him look that little bit closer.
With the support of his MC brothers, Table not only is reminded that family is more than blood, but that some women are just worth fighting for.

The bald biker from the previous night answered the knock. He was tall, broad, and
shirtless, showing off an incredibly colorful array of intricate tattoos on his defined arms and
chest. The details were astounding. I forced myself to look up at his face and not at the gold
loops decorating his dark nipples. The color of his hair, if he ever let it grow in, would be a dark,
deep brown going by the neatly groomed Fu Manchu mustache and chin duster that framed his
mouth. There was a touch of gray, indicating some maturity. He was big all over, his stomach
and shoulders showing clear and precise delineations that could only come from a lot of physical
work. Power exuded from every pore, and I found it both intriguing and intimidating. I should
have been scared, but I wasn’t.
Why?
Because he had a tiny baby dressed in pale pink cradled in the crook of his hard bicep. He
held her close, curling her securely into his body, protecting her. How could anyone be scared of
a hard, strong man who was cradling a baby like she was the most precious person in his world?
It was enough for me to relax. Right?
His deep brown eyes regarded me silently, and I held up the basket.
“I have the eggs.” My voice came out croaky as my dry tongue stuck to the roof of my
mouth.
His mouth split into a grin that showed off the whitest teeth I’d ever seen. I could see his
natural charm, the kind that was irresistible. One look at that devastating smile and women
would be lining up. My lower stomach tingled as I remembered him burying his head between
the woman’s legs and her reaction.
He turned his head and yelled back in the house, “Yo, Nanny! Your tenant’s here with the
eggs!”
“Imma comin’!” I heard faintly from the interior.
The baby squirmed in his arm and let out a little grunt. He jostled the pink bundle and
made shushing noises at her. “Ch-ch-ch almost there, baby girl. Almost there.”
He looked at me and smiled again. “Bottle’s not quite ready and she can get impatient.
Name’s Table.”
Table? Strange name for a girl, but the last year had been a strange one for me in a lot of
ways.
“Never knew a little girl named for a piece of furniture.”
If I hadn’t been holding the heavy egg basket with both hands, I would have slapped one
over my mouth. I didn’t want to anger my landlady and that probably should extend to her
grandson.
He seemed to take my faux pas in stride and laughed, those beautiful teeth flashing again.
“Nah, my name’s Table.”
“Nice to meet you, Table. I’m, uh, Lori.”
His smile got bigger and he nodded at the fussing baby. “This is my little girl, Angel.
Come on in to the kitchen. Nanny’s gonna have food ready soon and I’ll bet money she’s got a
full plate with your name on it.”
I entered the house like I was stepping back in time. The furniture was old, antiques you’d see in a museum-type house, but the pieces were still being used regularly and looked well cared for. I caught a faint scent of bacon grease in the air and heard the pop and sizzle of cooking meat. The kitchen contrasted with the antique look of the furniture. It was huge, with stainless steel modern appliances. Martha was shuffling around the stove, wearing another bright floral top, this time with blue denim capris. Her wiry gray hair stuck out and curled up into an odd-looking crown around her head. 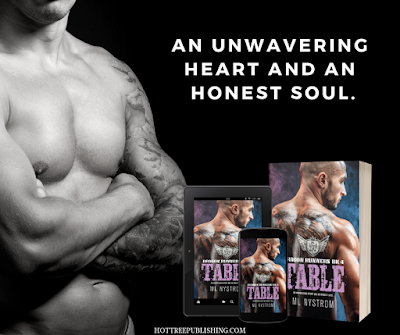 Facebook | Twitter
I’ve had stories in my head since I was a child.  All sorts of stories of fantasy, romance, mystery and anything else that captured my interest.  I’m a voracious reader, and have spent many hours in my life devouring books, therefore it’s only fitting I should write a few myself!
I’ve spent most of my life as a performing musician and band instrument repair technician, but that doesn’t mean I’m pigeon-holed into one mold.  I’ve been a university professor, belly dancer, craftsperson, soap maker, singer, rock band artist, jewelry maker, lifeguard, swim coach, and whatever else I feel like exploring.  As one of my students said to me once, “Life’s too short to ignore the opportunities.”   I have no intention of ever stopping so welcome to my story world.  I hope you enjoy it!