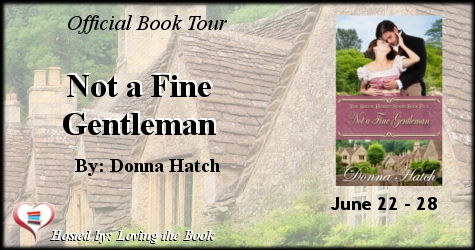 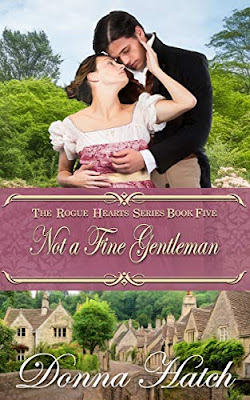 Lady Margaret secretly yearns for love, but fate has exchanged wedded bliss for a lie. When she is caught hovering over her cheating husband’s dead body, she is instantly doomed to hang for his murder. Without hope for justice, Margaret flees into the night alone.
A cynical Bow Street Constable, Connor Jackson, vows to bring the fugitive Lady Margaret to face the law—but, he doesn’t expect sparks to fly between them. Could the strong yet tender lady truly be a killer?
As more suspects—and even more condemning evidence—surface, the less certain Connor is of his duty. He must choose between his growing feelings for Lady Margaret and the demands of justice. Will the truth tear them apart or set them free to find love?


The Rogue Hearts Series:
The Stranger She Married
The Guise of a Gentleman
A Perfect Secret
The Suspect’s Daughter
Not a Fine Gentleman

Praise for Donna Hatch:
“Donna Hatch is one of the masters of clean romance with electric tension and smokin’ hot kisses.” ~ Reading is My Super Power Reviews


SNIPPET
Under his voice, Jackson said, “Best not to let them know who you are. Follow my lead.”
Before Margaret could reply, the justice of the peace called to Jackson. “Sir, a moment?”
Jackson stood and replied to the JP, “Of course. But as you can see, my wife has sustained some injuries and I’d like to get her to the nearest inn where she may rest.”
Margaret barely managed not to let her mouth drop open. Wife! Of course. His gentle attentiveness had all been part of that ruse. He’d been playing a role, like an actor. Her pleasure popped like a bubble. She clenched her hands and clamped down her jaw. It shouldn’t rankle. After all, he was a low-born working man with the manners of a sailor and the hands of a field worker. As soon as she safely reunited with her family, she’d dismiss him and never give him another thought. Ever.
The Justice of the Peace asked Jackson a few questions. Finally, the JP nodded to Margaret. “Ma’am. Do you have anything to add?”
Margaret spoke in a higher range than usual and put in a breathy quality to her voice as she once did when prowling ballrooms looking for a gentleman of rank and wealth to charm her way into a proposal. “Oh, no, sir. My beloved husband”—she shot an overly adoring gaze at Jackson— “said it all so beautifully that I have nothing at all to say.” She batted her eyelashes at him. Jackson blinked and his eyes widened just enough to reveal his surprise. He recovered and shrugged at the JP with a smile. “We’re newly married.” “Er, thank you both.” The JP strode away to speak to another passenger. With his brows raised, Jackson let out a half laugh. “You should have been on the stage.”
“I might say the same about you.”
Scoundrel. Of course he knew she was playacting and not speaking in earnest. She’d been foolish to believe, even for a few seconds, that he could be tender instead of a complete cad. He was far beneath her notice. A servant. A peasant. A worm. There, that felt better.