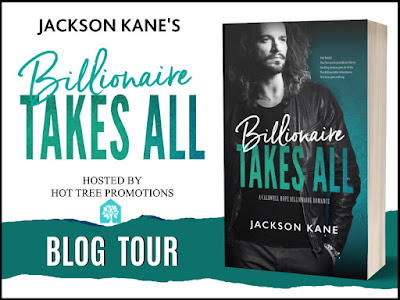 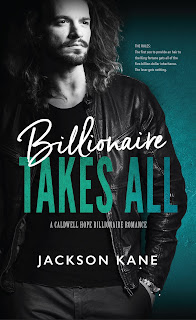 The rules: The first son to provide an heir to the King fortune gets all of the five-billion-dollar inheritance. The loser gets nothing.

I did everything my father asked, including following in his footsteps to become one of the country’s most ruthless businessmen. I deserve that inheritance more than my deadbeat, musician brother.

Ridiculous. All I do is win and this test will be no exception.

The record store owner, Gloria, is a sexy, alt-rock firecracker and the opposite of what I need right now, but the more she pushes me away, the more I need to have her.
Lucas

My pompous prick of a brother thinks he can beat me? I’m Mr. Sex, Drugs, and Rock and Roll. I can knock up any girl I want.

Any girl but the one I really want. The reason I stayed away from my hometown was because my high school sweetheart, Molly, married someone else. And now that I’m back, she’s still all I can think about.

Jackson Kane’s Billionaire Takes All is a scorcher that features dual POVs of both rival brothers as they screw each other over in their pursuit of thrills, sex, love, and the competition for their five-billion-dollar inheritance. Who will win their father’s test? Will it be the high-powered alpha CEO Richard, or the sexy heartthrob rock star Lucas? Only one Billionaire Takes All.

“Excuse me,” the woman repeated, getting closer. She was trying to hide the bookish timidity from her voice.
That voice was crazy familiar….
“For Christ’s sake, you’re excused.” I grumbled as loudly as I could, shifting my arm to further shield my face from the relentless sunlight. “Now let me sleep.”
She scoffed at my bluntness.
The kick in the ribs I received wasn’t bookish or sweet.
“Fuck me, that’s a rude way to treat a guest.” I recoiled, rolling away onto my stomach. My long, dirty-blond hair cascaded down both sides of my face as I lifted myself from a push up position. Once I got my knees under me, I shot a quick glance at her, but my eyes hadn’t adjusted fully, so I only caught a glimpse before the intensity of the sun forced me to look away.
Her long, layered, brown hair had soft curls and was pulled back into a ponytail. She had a slight, yet athletic frame, and wore a gray dress. Was that the glint of glasses I saw?
Wasn’t the girl last night a redhead? I also didn’t remember her being this gorgeous….
“Rude? Guest?” Her tone screamed the gall of this man!
That didn’t make any sense. I distinctly remember being invited to the party last night by a few fans. They wanted me here. Why was I being yelled at?
My ears were still faintly humming from all the music I had played.
I carelessly rubbed my sore chest and abs to get off the matted grass and dirt. It was a useless effort; all my tattoos made the mess impossible to see, let alone brush off. I desperately needed a shower. I cocked my head to the side, and through my hanging hair caught the pretty brunette gawking.
She could try to hide it, but I could tell that she liked what she saw. Damn right, I thought. I don’t work out five times a week to not look good.
“Yeah, guest. You invited me.” My long hair blanketed my head like an overturned mop. With the speed and precision of someone who was just hit by a car, I grabbed the wadded fabric in my back pocket and pulled out a purple G-string. “These are yours, aren’t they?”
“Eww, no! And this is school property. No one invited you to sleep here!”
“What?” I flipped my hair back and took in the surroundings. If they weren’t hers, then where the hell was I?
The long, rectangular building loomed nearby, obviously some kind of school. I spotted the playground peeking out from the back of the nicely remodeled building.
Oh wonderful. I’m shirtless and reeking of booze in front of an elementary school. Definitely not one of the high points of my life…. Yeah, this won’t make it into my autobiography. I was glad it was Saturday.
At least I hoped it was Saturday….
Either way, there were no children around, thankfully. Although, I’d probably make a good example of what not to do when you grow up.
Then it got worse. I spotted the name on the building—Matt Baker Elementary school. Matt Baker. That’s where I was?
“Oh shit…,” I muttered. That’s why she looked and sounded so familiar. 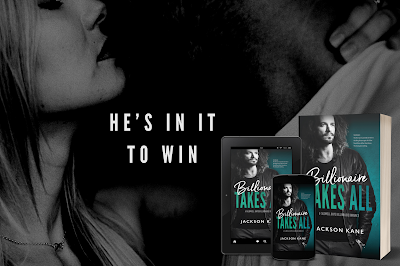 Jackson Kane is a professional stuntman, athlete, romance author, and above all else, a hopeless romantic. From American Ninja Warrior, to some of your favorite films, Jackson brings a unique writing style forged from countless harrowing adventures.

He’s a lover of travel, his fans, his romance author peers, dulce de leche, and all things beautifully weird and interesting. He invites you to relax, have a pisco sour and let him thrill and excite you in a way no other author can. Jackson will show you what the world looks like through the eyes of a genuine Bad Boy.

Come with him, and…